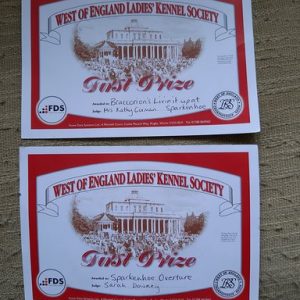 A good day for the Sparkenhoe show team at WELKS (West of England Ladies Kennel Society) General Championship show in April. This is held at the Three Counties Showground in Malvern.  With the beautiful Malvern Hills as a backdrop, it has to be one of the more scenic showgrounds in England.

A General Championship show is one where there are classes for breeds in the group system.  This comprises the Toy, Terrier, Hound, Pastoral, Working, Utility and, of course, Gundog groups. At a championship show there are Challenge Certificates available in most breeds.  These are awarded to the best bitch and best dog in each breed.  A show champion is a dog that has won three or more challenge certificates.

In GSP, Lark (Sparkenhoe Overture) won Yearling (dogs between one and two years of age) and in Bracco Italiano, Magda (Braccorion’s Livin it Up at Sparkenhoe) won Post Graduate.

An enjoyable day, despite the chill wind, spent with friends.